Despite the saying “fighting like cat and dog”, our purring pals and barking buddies can actually get on quite well. In fact, cats and dogs can form a very strong friendship.

So, what do you do when you have a client whose cat and dog don’t get along? It’s important to recognise the situation and to have a few tricks up your sleeve to help our four-legged friends play well together.

If your client’s cat and dog don’t get along it’s essential to understand their differences. For example, if you have a rambunctious dog and a very timid cat, it’s not surprising that the two don’t see eye to eye.

Likewise, if you look after a cat that’s moody and aggressive and a dog that’s playful there’s likely to be a few issues from time to time.

Understanding the differences between the animals will help identify the compatibility problem and will hopefully help lead you towards finding a solution.

Also, consider the age of the animals. A senior dog may gradually become less tolerating of a playful cat.

If it’s only on occasion that the cat and dog don’t get along, providing the animals with separate ‘safety’ spaces might do the trick. For example, make sure there’s a certain area that only the cat can access.

Having some time away from each other might help them to sort their differences and be a little more tolerating of each other.

Of course, dogs and cats are different animals but it really comes down to personality as to whether they get along or not. However, even if a cat and dog do get along well, it’s still important to give them each their own space.

Make sure to keep their food bowls away from each other—even in different areas of the home. Stealing food can be a prime cause of a failed friendship!

Also, make certain each animal has its own toys.

If your client’s cat and dog have previously got on well but all of a sudden show signs of irritation, there may be an underlying cause.

Two possible causes are illness or lack of exercise. Consider whether anything has changed. For example, perhaps your client has started working longer hours so the dog’s getting fewer or shorter walks.

Look for signs of boredom or pent up energy. Making sure the dog has adequate exercise, as well as mental stimulation, might just be the answer to the problem. 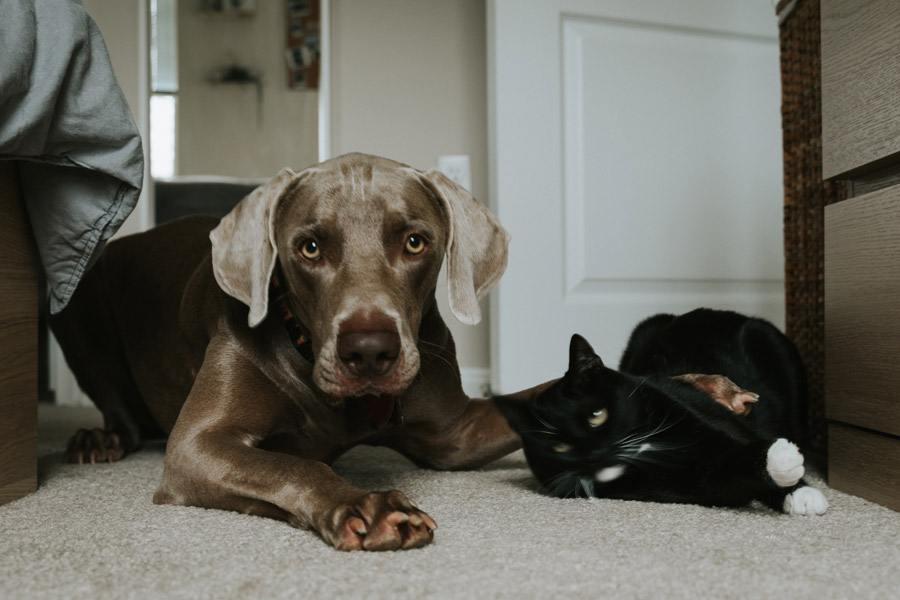 In cases where the client’s cat and dog don’t get along but one of them has only just joined the family (for example, they introduced a new puppy to their cat or vice versa), there are a few possible actions to take.

Indeed, the issue might be that the owner didn’t take enough care in the first place when introducing the animals to one another. In this instance, you might need to start from scratch.

A new kitten or puppy should be confined to just one room initially. This allows it time and space to get to know its new surroundings. It gives the kitten or puppy time to accept the new smells and familiarise itself with new sounds, without feeling threatened by other animals.

After a few days, you can begin introducing the puppy or kitten to its new furry friend. When doing this, allow the new member of the family free reign and put the existing dog or cat on a leash or harness.

Give treats to both your furry friends and encourage play, but don’t overdo it. You don’t want the excitement to get out of control.

You will need to keep a close watch. Over time the animals can spend longer together and eventually (within a couple of weeks) you’ll reach the stage where the two don’t need supervision.

Care and a close eye

Even the best of furry friends can fall out from time to time. As a pet professional, it’s important to be on the look out for potential problems. After all, an unusual change in behaviour could signal a bigger issue.

Have you had a client whose cat and dog don’t get along? What actions did you take to help resolve the problem?