Skip to content
Home/Information Centre/Travel and keep company with furry friends? Yes, you can!

Travel and keep company with furry friends? Yes, you can!

Travel and keep company with furry friends? Yes, you can!

Are you interested in travelling the world for free while keeping company with furry friends? Hear from Australian house and cat sitter Madolline Gourley she shares her story.  I think she’s found the perfect gig!!

A Christmas to remember: House sitting in Boulder Colorado, by Madolline Gourley

House and cat sitting for strangers as a cheaper way to see the world? Yep. It’s a thing. A thing I heard about nearly two years ago. And a thing I’ve been doing on and off since December 2017.

I’ve sat on both the east and west coasts, and in the mid-west. But my most memorable stay was in Boulder, Colorado, over the recent Christmas–New Year break. This was a sit I got through housecarers.com. (Other good sites are trustedhousesitters.com, mindmyhouse.com and housesittersamerica.com.   I applied for the sit in September 2018 after returning from a two-month house and cat sitting adventure that took me all over the United States. I’m from Brisbane, Australia, where it’s anywhere from 85 to 95ºF on Christmas Day, and I thought it’d be nice to spend the holidays in the snow for once.

Fast forward to 23 December 2018. I was leaving Seattle, where I’d sat for another lady, due to arrive at Denver International Airport at 10.50pm. I’d missed my flight by five minutes. The gate doors had just closed. This was the first—and hopefully the last—time this has happened to me. After re-booking my flight for 6am the following morning, I contacted the homeowners to tell them I’d missed my flight. I felt terrible and thought this would jeopardise the rest of my stay. They were great about it. They said it wasn’t an issue because they were leaving on Christmas morning. This still gave us some time to go through everything together on Christmas Eve. And they were certain everything would work out as it should. And it did. Eventually.After Skyping the couple, I heard back from them the next day. I’d got the sit. It’s always a pleasant surprise when an American family picks the Australian-based sitter. Someone who’s some 7,500 miles away. Not even in the same hemisphere. But I think being Australian is also what helps me get these sits.

I made sure I was at Sea-Tac Airport well ahead of my departure time. I wasn’t going to miss my flight again. Some hours later, I made it to Denver. I collected my hire car. Drove to Boulder. And got some groceries to eat on Christmas Day (sweet potato cupcakes, and sweet potato and herb ravioli). Then I began the 15-minute drive up the mountain. It was pitch black and I was very nervous about reversing off the side. Nearly 40 minutes later and I made it. Way later than my original ETA. But I made it.  Here’s Nika, the couple’s rescue cat:

The couple were really lovely about the late arrival that night. I unpacked my things and they walked me through the ins-and-outs of their amazing, architecturally designed hilltop home. I was then introduced to their rescue kitty, Nika. Nika remains my favourite out of the 20 or so cats I’ve looked after. I’ve looked after purebred Persians, Siamese kittens, feral-and-rehomed cats, and many rescue cats, but Nika wins hands down. I was told she liked to play a ‘game’ where you’d open one door, and Nika would run through the room expecting you to open the other door for her to run back out. We’d do this three or four times each day. I think she’d have you play this game all day every day if she had it her way. The couple then prepared a vegetarian dinner—which, being vegetarian, I really appreciated—for the three of us before calling it a night.

And the sit begins

I woke up the next morning—Christmas Day—to a Christmas card and small gift. It was totally unexpected. But I really appreciated it. I was spending Christmas Day by myself after all. Very far from home. Just me and Nika. In a massive house atop a mountain. So a small gesture like this made my day. There was no snow on Christmas Day, sadly, but at least it wasn’t the 95ºF I have come to expect. It did, however, end up snowing for the next few days. And again on New Year’s Eve. The snow on New Year’s Eve was so bad I was actually snowed in. Or I could have risked it, like I did a few days before, and gone out that night. My car became stuck halfway up the mountain before a kind stranger stopped to tow me for the next mile. But this wasn’t an experience I wanted to re-live. This meant it was Netflix for the next 24 hours. Just me and Nika again. I’d say we were best friends by now.

Despite the couple’s amazing property, the sit was very light on duties. Their neighbours were responsible for ploughing the driveway. And the only real responsibilities were to feed and look after Nika. Play with Nika. Check the mail each day. Bring in any packages. And clean up after myself. I’d also send regular photo and video updates on how Nika was doing. For a property of this size, I was very fortunate to have so few tasks and so much free time.

Throughout my 10-day stay, I saw some amazing things. Eldorado Canyon State Park, Red Rocks Amphitheatre, Paint Mines Interpretive Park, Central City and a frozen lake in Nederland. I enjoyed stopping in at the stores in and along Pearl Street Mall. Eating delicious Thai food from Thai Avenue and Aloy Thai. Photographing some of the most beautiful Christmas lights displays I’ve seen. And stopping to appreciate the natural landscape before continuing my drive home each afternoon. 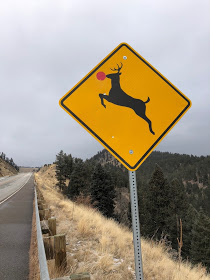 On 4 January 2019, it was time to head off. My house and cat sit in Boulder had come to an end. It was time to say goodbye to Nika and travel to my next stop, Los Angeles. I left at around 3am and messaged the owners to let them know everything had been taken care of and wished them safe travels back to Boulder.

I received a nice thank you message a few days later. They were very happy with how Nika had been treated—they said it was like they had never left her. Previous cat sitters hadn’t given Nika their full attention and it was sad to hear the couple had returned to a miserable kitty. It was nice to know I had restored their faith in having a stranger house and cat sit for them. I was told I was welcome back anytime. And I’d happily return. So for those of you who’ve ever considered international house sitting, just give it a go! I got the first house sit I applied for back in October 2017. And I’ve done 12 sits since then. Not only do you get to stay in some amazing places, you form friendships with people you wouldn’t have met otherwise. I keep in regular contact with about half the people I’ve sat for, and I’ve been invited to house and cat sit again for many of them.

Liz has a passion for all things animal - whether it's cats, dogs, rabbit or horses! Liz was one of the first in Australia to bring Pet Insurance to the market. She has headed up Petsecure Pet Insurance for the past 12 years, and Pet Professional Insurance since 2018. Liz is committed to promoting and supporting the amazing work done by rescue groups around Australia, supporting those who work in the pet industry, as well as those who work to promote a better life for all animals.