Pam Ahern, Founder and Director of Edgar’s Mission, a not-for-profit sanctuary for rescued farmed animals, shares her story of how she carved a career for herself working with animals.

“My parents were great animal lovers. My mum loved cats and my dad loved dogs. But I really cut my teeth when I started working in a rescue for cats and dogs.

“As a kid, I always managed to find stray cats and dogs in the neighbourhood and I would bring them home. So it was a natural progression that I would go on to foster cats and dogs and find homes for them.

“It just so happened, we moved to the country and there was no one in our area looking after lost or abandoned animals, so the plight for these animals was tragic. They were actually shot at the local tip, which my mum and I found heartbreaking.

“Off our own back, we started the Central Highlands Animal Shelter. We did this without the internet, Go Fund Me campaigns or social media to help raise funds or spread the word. We would try to find homes for the animals that came to us and have them desexed at our own expense.

“Caring for animals has always been part of my life. We would stick posters up at the local supermarket and, thankfully, we did manage to find wonderful homes for many of the animals in our care. And, if we didn’t, they stayed with us. We had a lot of animals!” says Pam.

“In 2003 I worked with Animals Australia on the Save Babe campaign. While I grew up loving animals, I took great comfort in the fact that the wider society cares for animals too. This can be seen in the fact we have legislation to support animals; it’s called the Prevention of Cruelty to Animals Act. We recognise animals as sentient beings.

“Yet, as I learned more about farmed animals, I recognised that we had been guilty of playing favourites. We don’t treat animals on their ability to suffer or their desire to experience the world in all its magic. Sadly, we treat animals on the form they’ve taken, our familiarity with them and on our intended use for them. We don’t take into consideration who they are.

“How this has happened is through Codes of Practice; they circumvent our ethical thought and our animal protection legislation. This has meant that pigs, chickens, sheep and other farmed animals are specifically excluded from the animal cruelty laws that protect cats and dogs.

“However, I love that the laws in our country reflect public thought and they can change over time. The Code of Practice for pig farming was up for review in 2003 and this gave us a golden opportunity to highlight our animal protection legislation. And, as the universe would have it, Hollywood actor James Cromwell, from the hit movie ‘Babe’ was in Australia.

“This presented a wonderful media opportunity to champion the cause of pigs, but we needed a pig for the photoshoot. This is where Edgar “Alan Pig came in. He was from a production farm, so he would have been turned into pork, ham or bacon. He got lucky and got to walk the catwalk of life and in doing so he encouraged many people to change the way they think about farmed animals.”

Edgar also changed the course of Pam’s life and career. She went from being a highly successful equestrian to championing the plight of pigs and raising awareness of our flawed animal protection legislation.

She explains, “as a very successful equestrian, I really thought I was living my dream. I thought this was what I was going to do for the rest of my life; I would die in the saddle as a 99-year-old lady!

“But then Edgar the pig came into my life. I got down off my high horse to champion the cause of animals. I realise now that the relationship I had with horses and training them was really a direct pre-cursor for what I do now. Learning so much about animal behaviour, but also what I was capable of, enabled me to get to where I am now.

“I’d heard that pigs were quirky and intelligent but when you have one in your home it’s just amazing. They are incredibly intelligent, personable, VERY clean and fun-loving. I just wanted to share this with the world.

“There’s a wonderful quote, which sums up my life perfectly…

I may not have found where I intended to go, but I think I ended up where I needed to be.”

Pam wanted a sanctuary for Edgar where he could receive life-long care. However, there are very few places that look after rescued farmed animals. This is where Edgar’s Mission began.

Now set on 153 acres near Lancefield, Victoria (Australia), it currently provides care for 437 rescued animals (at the last count!). It provides education, outreach, advocacy, community enrichment and farm tours—encouraging people to expand their circle of compassion to include all animals.

“We run free educations programs and tours. I believe in the goodness of the human heart and I also believe the universe looks after those who are kind. For many years I even found it very difficult to take donations. However, I realised how much it means to people to support the work we’re doing; they wanted to give donations to help be part of what it is we’re doing. Volunteering and sharing our posts on social media also help support the work we do.

“We’re not driven by the profit. Yes, we do need funds and we need to be able to cover our bills but we have been able to do this by doing what we do. That’s telling the story of animals, saving those we can and spreading the message of kindness to animals as far and wide as possible.”

It is Pam’s love of animals, her kindness and passion that drives her to continue doing what she does. She says, “I love the sense of purpose my role gives me. It’s not an easy path that I’ve taken but I feel I’m where I need to be. We all want to find out sense of purpose in the world whether we’re human or non-human.” 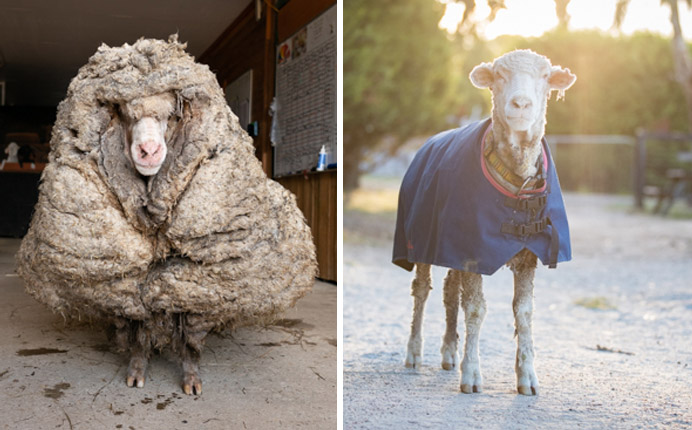 Be Kind to Animals Week

Pam believes a simple act of kindness can change an animal’s life for the better. The story of Baarack the sheep supports this belief.

Pam recalls, “Baarack was found by a member of the public in the State Forest. He’d snuck off as a little lamb and had been roaming wild for about six years, during which time his fleece had not been cut. The person who saw him could have chosen to look the other way but they realised what they did next would determine whether that animal lived or died. They chose to save the animal and that speaks to the goodness of the human heart.

“Baarack came to us and we got his fleece off him (check out his before and after pic above) but his story has touched hearts and changed minds around the world. It teaches us that it’s important to see and seize what’s in front of us every day—and that’s the opportunity to live.

October 1-7 is Be Kind to Animals Week, an initiative of Edgar’s Mission that aims to raise awareness of the fact that ALL animals deserve kindness.

“October 1-7 takes in World Animal Day and it’s a great time to consider what it means to be kind to animals. We hope that people will take the kindness pledge and keep it in their hearts all year round,” says Pam.

The aim is to reach 5,000 pledges. Currently, the tally sits at 4,506. If you’d like to support the initiative, take action today and Edgar’s Mission.